A couple of weeks ago I was reading through my usual cartoon strips in the newspaper, when I came across a funny T-shirt quote. It read, ‘Do not lead me into temptation. I can do it myself!’ I couldn’t stop laughing for some time after reading it. But actually how true it is! We just keep falling into temptations, one after the other. And for some, it is so painful to give-in to temptations. We feel so guilty every time we fall; we curse ourselves and sometimes we even accuse God for giving us such temptations.

A few days ago in a sermon during the Holy Mass, I heard something radically different. The priest asked us to thank God for temptations. I was shocked when I heard that.  “Thank God for temptations?! Why??” Then he went on to explain, telling something that was really an eye-opener for me. He said temptations are not bad, evil, sinister things or situations. Instead they are an opportunity – opportunity to do good or bad. Every time we face a temptation, it gives us an opportunity to either fall for it and do bad or to resist it and do something good. How we look at it depends on us.

His sermon reminded me about one of the most beautiful thing that God gives us – the freedom to choose.  He never forces us to do anything. He says, “Today I am giving you a choice between good and evil, between life and death.” (Deuteronomy 30:15) And He leaves the choice open to us. We can choose either, but what we go through depends on the choices we make. During a major portion of my growing up I made the wrong choices, misused the freedom God so lovingly gave me. And I faced the consequences as well. Each day I was going deeper and deeper into the filth, unable to see goodness in myself, others and in God; unable to experience peace, joy and love; unable to stop myself from destroying whatever good was in me, unable to stop my life from becoming bad to worse. Till one day I met God and decided to follow Him. Decided to choose life. And life has not been the same since then.

“I am now giving you the choice between life and death, between blessing and curse, and I call heaven and earth to witness the choice you make. Choose Life!” (Deuteronomy 30:19) God wants us to choose life, but doesn’t force it upon us. He requests, He pleads us to make the right choice. And He values each decision that we make so much that He calls all the heaven and earth to witness it, still hoping that we make the right choice. In one of the retreats the preacher asked us a seemingly simple question. “In a fight between a good dog and a bad dog, which dog do you think will win?” Many of us said bad dog and many good. But his answer was a bit different. He said, “The dog whom you feed will win.”  In us also there is a bad dog and a good dog, the human spirit and the Holy Spirit. Who wins depends on whom we feed, depends on the choices we make daily.

Email ThisBlogThis!Share to TwitterShare to FacebookShare to Pinterest
Labels: choose life, decision making, Freedom to choose, god loves us, good vs evil, life vs death, self control, to do or not to do

It’s Feb – the month of Love and now only a few more days remain for the day many of us would be eagerly waiting for – the Valentine’s Day!! Whether it be newspapers or magazines or malls or card shops or even a stroll across any street in the city, you can’t escape looking at hearts, balloons, cakes, beautiful bouquets, chocolates.....This is the month in which one can truly say ‘Love is in the air.’ 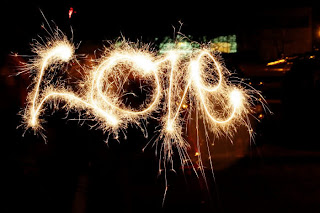 But what is love? Some say its a special feeling for a special someone, some say its an emotion, some say its a decision, some say its a chemical reaction, some say its the biggest mistake one can ever make, some say its life, some say its just indescribable!! Well, I found the best definition about love nowhere else but in the Bible. St Paul says:
“ Love is patient and kind.
It is not jealous or conceited or proud.
Love is not ill-mannered or selfish or short tempered
Love does not keep a record of wrongs;
Love is not happy with evil, but rejoices with the truth.
Love bears all things, believes all things, hopes all things, endures all things.
Love is eternal.”
(1Corinthians 13:4-8)
WOW!!  When I first read these verses I was just blown away. That’s what true love is. That’s how God wants it to be. A selfless, unconditional love.  And He showed it to us, “..it is not that we have loved God,  but that He loved us first and sent his Son to be the means by which our sins are forgiven.” (1 John 4:10) His Love follows us wherever we go, lifts us whenever we are down, protects us whenever we are troubled, guides us whenever we are unsure, surrounds us whenever we are alone, hugs us whenever we need a touch, brings out the best in us and strips away our weaknesses. His Love is always there for us.  And this is His special message for each one of us:
‘For God so loVed the world
That He gAve
His onLy
BegottEn
SoN
That whosoever
Believes In Him
Should Not perish
But have Everlasting life.’ (John 3:16)
He considers each one of us to be His Valentine. Do we consider Him special? This Valentine’s Day apart from wishing our special ones, let’s wish God, who loved us first. Let’s tell him ‘I Love You too’, coz He said it first, to each one of us, on the Cross. 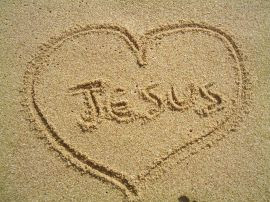 A couple of years ago when I wished God on Valentine’s Day, He replied  ‘I love you a lot’. But He didn’t stop there. He asked me to tell others also that He loves them too. God’s love is there for everyone irrespective of who they are, how they are, what they have done.
So on 14th Feb, lets spread the message of God’s Love. And the message is – God still loves the world. He is passionately busy loving you and me!!!
God Bless!
Posted by Thejas Sebastian at Friday, February 12, 2010 6 comments: Links to this post

The Big Picture - How Big is Our God!!

A couple of weeks ago I unexpectedly got a chance to go home and spend time with my family. I really enjoyed each and every second I spent there especially playing with my 5 yr old nephew. We played all sorts of games from crashing cars to chasing each other to drawing Ben 10 cartoons to even fighting with each other. It was total fun. During one of such playing spree, while chasing me, he suddenly shouted and started crying on top of his voice. I soon realised that he hit his leg on the edge of the door, but thankfully there was no injury. Still he was crying and shouting uncontrollably. He kept on saying, “Oh my leg is gone, my leg is gone!”,   “Oh no! I will never be able to walk again!!!” etc etc. I was just stunned. For an injury that was almost non-existent, he raised the entire house on his head!!
Many a times it happens to me also and I guess to all of us. Our problems seem so big and insurmountable that we forget about everything and just dwell on it helplessly. It seems to be the biggest problem the entire mankind has ever encountered! We run helter-skelter telling everyone about our ‘big’ problem, rather than finding a solution, and in the process give others some ‘big’ problems as well. We put an ant under a magnifying glass and scream as if it’s a dinosaur!! That’s why I thought of sharing ‘The Big Picture’ this time.
For each of us, we ourselves are most important and our problems, issues, expectations, feeling, disappointments the biggest. But we forget that we are just a small part of ‘The Big Picture’. We are just one among the other 6.8 billion Homo sapiens on the face of the planet Earth. On a picture of the Earth you cant see you or me or our ‘big’ problems! 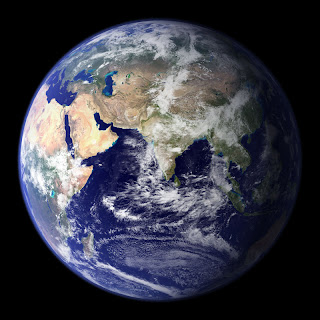 Earth sure is big. It’s huge!! When compared to Venus, Mars Mercury and Pluto it’s the biggest. 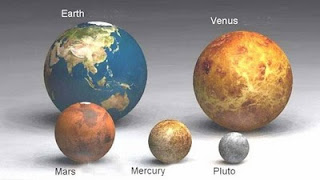 But it’s not big enough. It stands nowhere in front of other planets. Jupiter, the biggest planet, is bigger than 1300 earths put together. 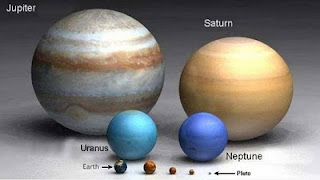 And as for Jupiter, it is one-hundredth the size of the Sun. If Sun were a basketball, Jupiter would be just a pea. In the picture, you can hardly see Earth, leave aside the 6.8 billion people, leave aside you and me or our ‘big’ problems!! 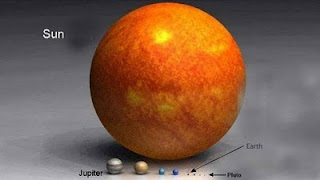 And if you thought Sun was the biggest, think again. 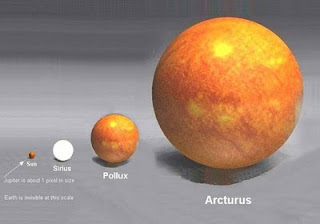 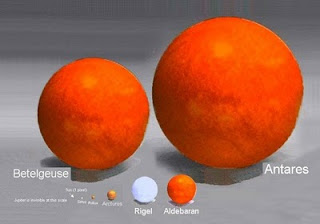 In front of Antares, Sun is nothing, leave aside Jupiter or Earth or its 6.8 billion inhabitants or you and me or our ‘big’ problems!!! And Antares is just one among the billions of stars that are there in the universe spread across billions of light years. Humans with all their capabilities and technologies have not yet been able to fathom the extent of the universe!
But God has. The Bible says, “The Lord determines the number of the stars and calls them each by name.” (Psalm147:4) We are still struggling to name the new planets and stars that we are discovering. That’s why we are coming up with names like UB313, GJ 1214b etc. But God, who created the entire universe, knows each one by name. That’s how big our God is! Bigger than the BIG universe.
If God is so big, where does the Earth, its more than 6.8 billion inhabitants, you and me and our problems stand in front of our BIG God?? The answer is – very close to His heart! Coz the same God, who named the stars, tells each one of us, “Do not be afraid – I will save you. I have called you by name – you are mine.” (Isaiah 43:1) Our God is not someone who sits up there and sees us poor little creatures, but He is someone who is with us right here, right now, who knows each one of us individually, who knows what’s happening in our lives, who knows what we are going through, who understands our troubles and worries, desires and dreams, who loves each one of us personally and unconditionally, who says, “Even the hairs of your head are counted. Do not be afraid.” (Matthew 10:30,31) That’s how Big our God actually is. Though almighty, He still cares for you and me. Though bigger than the BIG universe, He is still concerned about our smallest of the small problems. That’s ‘The Big Picture’. No matter what happens, we are safe in His arms. 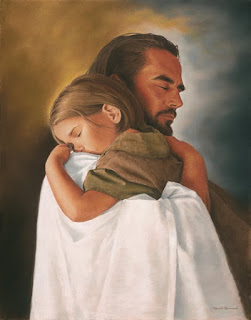 I have said this before and I want to say it again: Don’t tell God how big your problems are, tell your problem how Big your God is.
God Bless!
Posted by Thejas Sebastian at Saturday, February 06, 2010 4 comments: Links to this post

Email ThisBlogThis!Share to TwitterShare to FacebookShare to Pinterest
Labels: Do not be afraid, God Bigger than problems, How big is God?, How Big is the Universe? Our Big God, Isaiah 43:2, matthew10:30, Plasm147:4, the big picture
Newer Posts Older Posts Home
Subscribe to: Posts (Atom)