What is faith??? Everybody has something different to say.  As for me, Faith is Absolutely Illogical! Thats my POV.

I wanna tell you a story. 'Not so long ago, there was a man on a mountaineering mission. It was a dark winter night, and he was climbing up a steep, dangerous snow clad slope, when he suddenly lost control and fell... He fell off a cliff...... but fortunately on his way down to certain death he caught hold of a tree which grew right out of the cliff. He held on to it for dear life. It was very cold and foggy, so much so that he couldn’t even see his feet. While dangling in mid-air, he heard a voice asking him to “Let go”. Scared as he was, he tried ignoring that voice, but he kept on hearing the very same words again and again.  He realized that God was asking him to “Let go. Fall.” He said, “Here I’m hanging in mid air, holding onto a tree. I can’t even see what’s below me, and you are asking me to let go! What a stupid thing to do! I better stay here and wait for help than jump to my death. It would be morning soon and someone would come to rescue me.”  The morning surely did come soon, but not for him. That morning the local villagers were stunned to see a man frozen to death, holding on to a tree just a few feet above the ground!!' All because he thought that letting go was not logical enough. 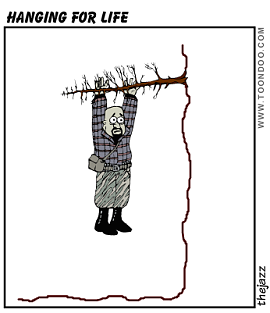 These days we have become so logical. We try to look at pros and cons in everything we do. But there are some things where logic doesn't apply. Falling in Love is one such thing. And faith is nothing but falling in love with God! Not because we deserve His Love but because He loved us first. (1John4:10). Why should God who created everything, come in the form of human and live on earth? Why should God die on the cross for our sins, for the sins of every human past, present and future? Why should God forgive sinners, those who forsook Him, those who humiliated, stripped, chastised, crucified Him? Illogical? Absolutely!! God’s love for us is illogical and that’s how our faith should be: ILLOGICAL!! 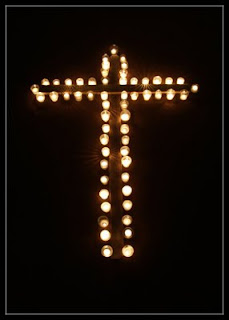 I would like to share an experience that one of my friends had. World Youth Day (WYD) is an event in which millions of youngsters from all over the world come together at one place to share, profess and grow in their faith in Christ. In 2005, Cologne, Germany hosted the WYD. My friend dearly wanted to go for it. But there was a major obstacle: Money. Somehow he arranged enough money for flight tickets, visa etc. After all this was done he hardly had any money left with him. He has been praying and longing to go for WYD for a long time. Finally he decided to go for it, even though it seemed completely illogical. When he left Chennai International Airport he had just Rs 500 (approx $10) with him and this was basically for his train fare back from Chennai to his home when he returns. He had absolutely no idea about what to do once he reaches Cologne. But he had faith in God! He prayed, he prayed every morning. And God sent him an angel every day. Every day He would come across someone who would sponsor his breakfast, lunch and dinner, would take him around and would give him a place to stay. All this, without him asking it from them.  It didn’t happen for a day or two, but for two week! In these two weeks he went around Cologne, Germany and France. He had a beautiful time during the WYD, and when he landed back in Chennai International Airport, he still had that Rs 500 with him. Everybody called him crazy when he decided to go for the WYD with just Rs 500 in his hands, but his illogical faith in God made it all possible. He had an all expense paid trip to Europe for two weeks and an experience of a lifetime, just because he trusted in God blindly.

Faith is ILLOGICAL! I'm someone who strongly believes in logical reasoning. Unless there is a strong logic supporting a choice, I wouldn't go for it. But when it comes to following God's ways, I try to keep the logic part away. Coz Faith is ILLOGICAL. And it is just that. Surely there are enough and more reasons to believe God exists, to logically prove His presence. But unless one experiences His Love, all the knowledge and reasons are  absolutely useless. And the only way to experience His Love is to trust in Him blindly.

the loving arms of God, our Father would be there to catch you. 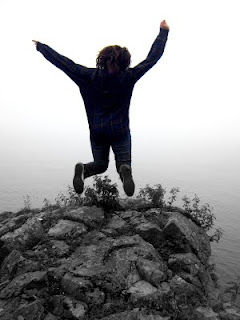 Jesus said, “I tell you the truth, if you have faith as small as a mustard seed, you can say to this mountain, 'Move from here to there' and it will move. Nothing will be impossible for you." (Matthew17:20)